Are you an insecure overachiever? By Laura Empson (From BBC CAPITAL)

Decades of research into elite firms identified a particular type of worker: exceptionally capable and fiercely ambitious, but driven by a profound belief in their own inadequacy.

"It feels like a constant need to prove you should be where you are, and a constant concern, before every meeting that I go to… am I going to make an idiot of myself here and are people going to see through a façade and think actually there’s no real substance to this?"

This is Jeremy Newman. Until recently, Jeremy was the global CEO of BDO, one of the world’s largest accounting firms. He currently chairs important government bodies and a range of other institutions. By any measure he is hugely successful in his professional life, and yet here he is, telling me that he privately worries constantly that he is not good enough.

He is not alone. In my 25 years of researching leadership and professional service firms (such as law and accountancy firms, consultancies and investment banks) I have heard numerous brilliant, successful, and apparently confident people describe themselves as insecure. They are ‘insecure overachievers’: exceptionally capable and fiercely ambitious, but driven by a profound belief in their own inadequacy. 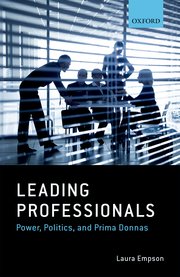 When I wrote about insecure overachievers in my recent book, Leading Professionals: Power, Politics, and Prima Donnas, I got a phenomenal response from people worldwide, in a range of sectors, saying that they identified with the term. Insecure overachievers are made, not born, and typically in childhood, through experiencing psychological, financial, or physical insecurity. [...]

[…] People know that they are being directly measured against their colleagues. But because they don’t actually know how their colleagues are doing, they set themselves incredibly high standards, just to be sure. And because everyone in the system is doing this, the standards just get higher and higher, requiring everyone to work harder and harder.

For insecure overachievers, this pattern persists. During my research, a senior executive in a consulting firm described two colleagues, who “feel that I will say to them, ‘Sorry. You’re not performing. You have to leave’… So I say, ‘Are you crazy? Why don’t you go home earlier and think about your family?’ And they say, ‘No, no, no, no, I have to work.’” More junior employees see their leaders behaving in this way and assume that this is what will get them ahead. And so, the pattern is repeated and constantly reinforced.

[... Sometimes, it] can be positive. David Morley, until recently the global senior partner at leading global law firm Allen and Overy, likens the senior lawyer on a transaction to the ringmaster of a giant circus that’s going on around them. “And if you’re good at it and you enjoy it, that’s very stimulating,” he says. “You can render a large bill at the end which is paid by a grateful client, and so you’ve got a very tangible number on the page illustrating the value that you’ve added. And then the phone rings and you’re on to the next one... It’s almost like a drug... this flow of excitement… and if you are good at it there are a lot of positive rewards that come from that."

However, taken to extremes, the long hours and being constantly driven to excel can lead to serious physical and mental health problems, ranging from simple exhaustion to chronic pain, addictions, eating disorders, depression and worse.

🔎 Laura Empson is professor in the management of professional service firms at Cass Business School, London, and a senior research fellow at Harvard Law School's Center on the Legal Profession. Her most recent book is Leading Professionals: Power, Politics, and Prima Donnas (Oxford University Press).
at September 27, 2018

“No one can make you feel inferior without your consent.” (Eleanor Roosevelt)

INTERVIEWS: How to answer the "TELL ME ABOUT YOURSELF" interview question